Trees remove huge amounts of carbon dioxide from the atmosphere. Many advocate planting more trees and others use trees as offsets for the emission of carbon dioxide. The importance of trees was demonstrated as a result of analyses of the Keeling Curve. The initial curve was the result of serial measurements of atmospheric carbon dioxide made at the Mauna Loa observatory. The inset shows the typical seasonal variation that is characteristic of o 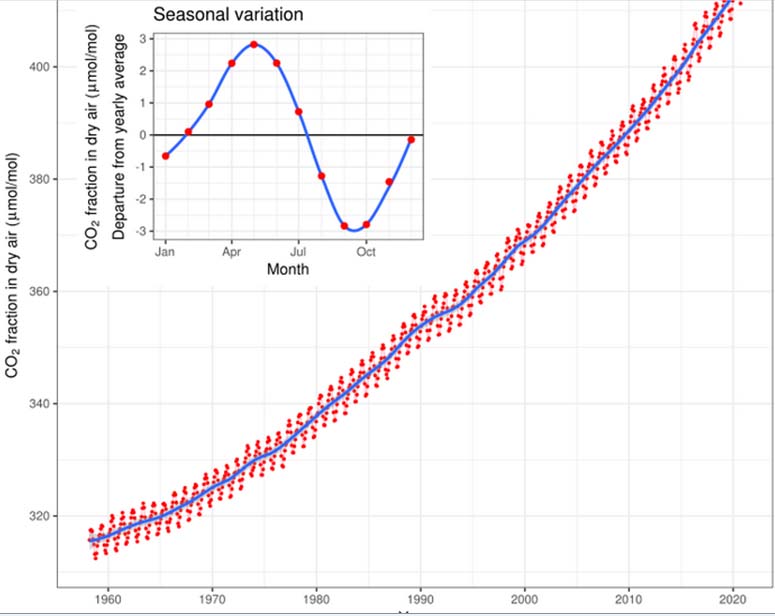 bservations made in the northern hemisphere. The transient fall is the result of carbon dioxide trapping by trees as they grow and form leaves in the spring and early summer.

However, not all trees perform this important task equally. This is particularly evident in a comparison between boreal forests that cover large portions in the high latitudes of the northern hemisphere and urban forests. Although some boreal forests are managed, for most there is little human intervention and therefore virtually no emission of greenhouse gases. In contrast, urban forests are highly managed and carbon dioxide emissions occur as a result of this management. In general, the amount of carbon dioxide sequestered by a tree depends on the its size at maturity, its growth rate, and its life span. While these factors also apply to urban forests, carbon dioxide fixation is offset by the emissions associated with tree management and disposal. These factors include emissions associated with planting - transportation to the planting site (trucks) and mechanized equipment used to plant the tree (backhoes for the balled and burlap-bagged trees that are common), fertilizers and pesticides, pruning and disposal (chain saws, chippers to create mulch, stump grinders, trucks, etc.) and the construction and preparation of a site. The landscaping at entrance to the Heiser Community Center provides an excellent case study. In the images, all taken on the same day, one sees several trucks, including a cement mixer laden with cement (a major source of carbon dioxide emissions) and multiple workers, all of whom had to get to the job site. A small backhoe, a mechanized device that buried the irrigation pipes, the pipes themselves, steel reinforcement for the cement and other sources of carbon dioxide emissions are not seen. The copious amount of mulch, while useful to suppress weeds and retain moisture is another source of greenhouse gases as decay occurs. The list carbon dioxide sources is long.

This reality led Dave Nowak and associats to develop the concept they refer to as the last positive point (LPP) the last year in which carbon emissions related to tree maintenance becomes greater than the amount of carbon sequestered. The higher the LPP the more beneficial the species and maintenance practices are for reducing net carbon dioxide emissions.

The existing and planned trees for the area south of parking area 7 are shown in the annotated ariel photo. The trees range from a sweetgum (Liquidambar styraciflua) with an LPP of 920, through the red maple (Acer rubrum) the second most prevalent tree at Kendal with an LPP of 360 to the river birch (Betula nigra) with an LPP of 60, which is also common at Kendal. Additional landscaping that is not shown in the figure, including the planting of prairie grasses, will enhance carbon dioxide fixation at the site. 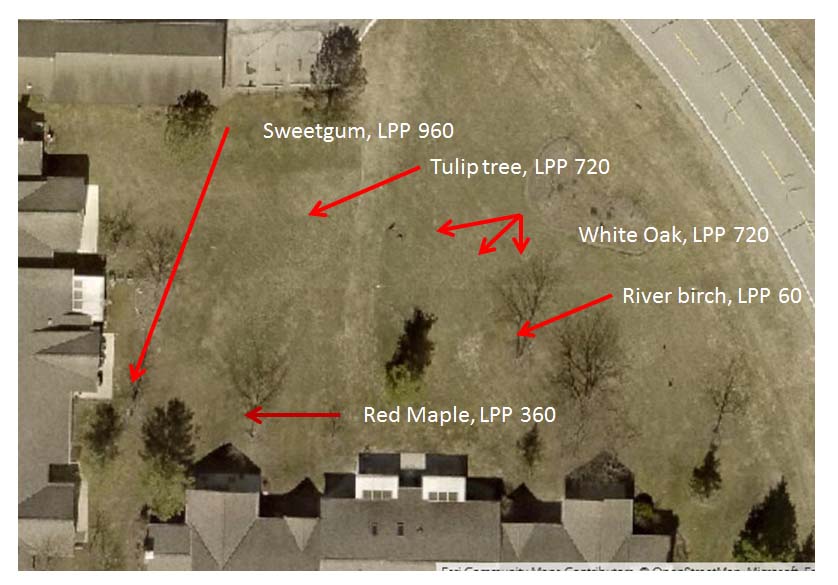 The newly renovated and constructed garage complex that includes solar panels, three electric vehicle charging stations, and plantings that demonstrate a spectrum of carbon dioxide fixation by trees makes this an ideal location for considering Kendal’s role in combating the climate emergency.