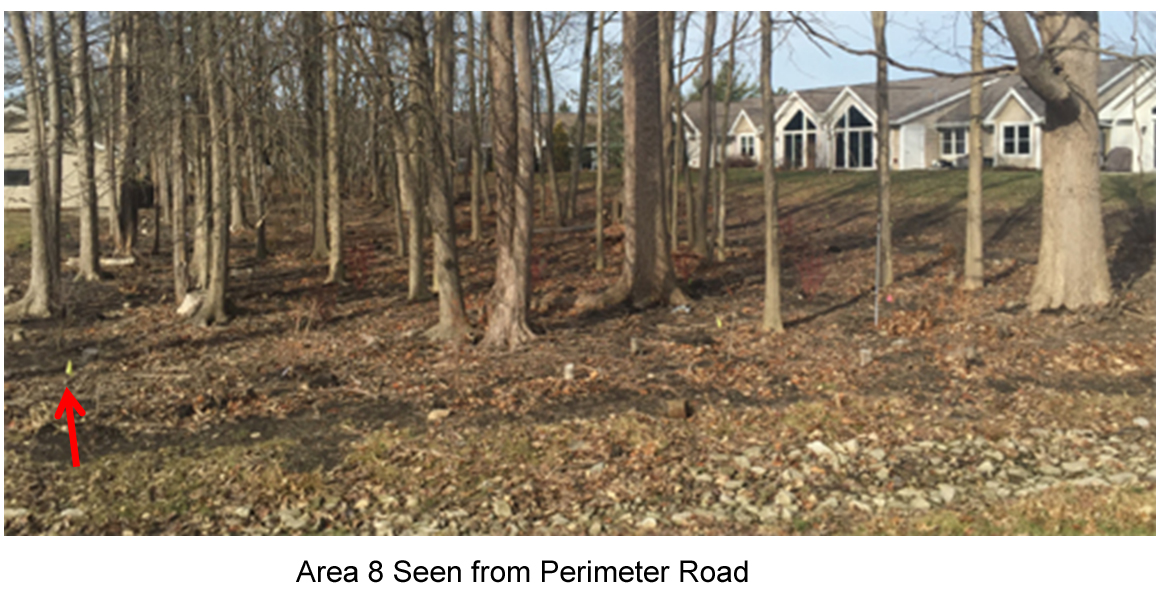 Much work in getting rid of invasives, especially buckthorn, was done at The Woods At 8, by what came to be called the Kendal "buckthorn brigade." Thankfully, the variety of native plants there and at the Woods At 4 was healthier than in parts of the Buttonbush Woods where there had not been as many taller, older native trees. This Woods At 8 will begin to be very beautiful from the perimeter path and roadway early this spring as hundreds of additional trees, shrubs and flowers have been added into the area.

The plants you might notice early on are the twelve spicebush (Lindera benzoin) which the Ohio Division of Natural Resources says is "one of the first plants to flower, often having fully expanded small yellow flowers by late winter, and even mid-winter if enough warm days accumulate in January and February to cause bud break." As I write this in early January we are having some days in the high 50's F. so bud break could occur early. This deciduous shrub is from the Laurel Family. Note that it is dioecious, so you will see male flowers on one bush and female flowers on another. Of course, the male flowers are larger and showier. The Spicebush is very suitable for our ecological restoration in The Woods at 8 as it's native to the eastern U.S., found as an understory shrub in moist to wet woodlands, and thrives in partial to full shade.

Another added plant at Lot 8 you might notice in early spring are 8 American hazelnut (Corylus americana). Actually, its male flowers (catkins) form in summer, but they grow more in winter and early spring, turning yellow, often with miniature deep red female flowers nearby. It is very hardy, disease resistant and tolerant of a wide variety of growing conditions. Vertical suckers make for a dense interior, causing it to appear more bush-like. Its nuts provide food for many mammals, including human beings.

Trees you truly will not miss a few years from now as they grow larger at Lot 8 are the Redbud (Cercis canadensis). Heralding the beginning of spring, its flowers are very noticeable as they bloom before its leaves emerge. The flowers, however, are not red, so why wasn't it named the "Lavenderbud" or the "Pinkbud"? We have a number of these wonderful bloomers with heart-shaped leaves in other locations in the Arboretum.

As the weeks go by, enjoy Red osier dogwood, Winterberry, Carolina allspice, Paw Paw, Swamp azalea, Fragrant sumac and Virginia Sweetspire, not to mention the northern border of wildflowers which will enhance this Woods all summer and fall. Celebrate ecological restoration at Kendal at Oberlin.

Note: The locations of many of the plantings described above are marked by flags, see red arrow above, that are easily seen from the road or perimeter path.