Book Review, The Songs of Trees

Book Review, The Songs of Trees

In The Songs of Trees David Haskell picks out a dozen trees around the world and inspects each one with the careful eye of a scientist. From those observations, he produces a work that is lyrical and evocative, yet grounded in current understandings of biological networks and how these trees are joined to the natural world around them, and to humanity as well.  From the tropical ceibo to the northern boreal balsam fir, the southern sabal palm to the western cottonwood, to the geopolitical boundaries inhabited by the Jerusalem olive and the Japanese white pine that survived the Hiroshima bombing, Haskell delves into the complex relationships the trees have with their environmental niches and with humanity’s understanding and treatment of them.  David Haskell was a Pulitzer Prize finalist for his previous book “The Forest Unseen”, 2013 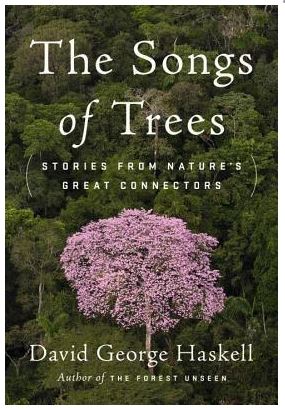