The American chestnut (Castanea dentata) was a keystone species in eastern forests at the beginning of the twentieth century. There were literally billions of these trees that grew to immense sizes. They were America's largest broad-leaved tree. They provided many critical ecological services including food and shelter for animals, birds and insects. They were an important food source for Native Americans and early settlers and were a valuable source of lumber. They served as an inspiration for poets, composers and artists. Think of "chestnuts roasting on an open fire" and "Under a spreading chestnut tree the village smithy stands ..." and others. Since then, the chestnut tree population has been decimated by invasive and aptly-named fungus, Cryphonectria parasitica. This once grand species is functionally extinct. 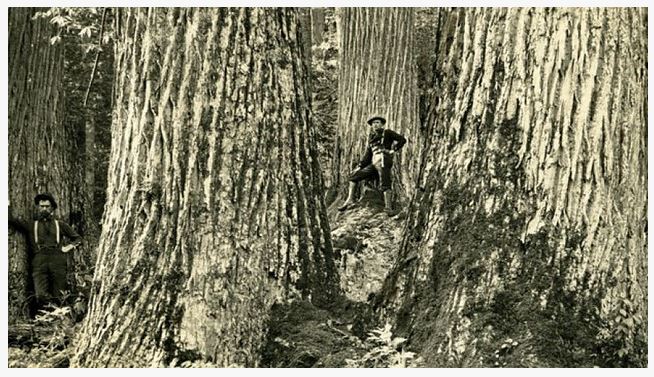 Features
The narrowly elliptic alternate leaves are between 5 and 9 inches long and have a pointed toothed end. Leaves usually have between 12 and 20 parallel veins that end in a bristle-tipped tooth. The tops of the leaves are a slightly yellow-tinged green and are paler and slightly hairy beneath. In the spring and early summer the male catkins produce pollen. The stubby conical female parts are much less evident. Burr-like husks may contain   or 3 nuts. The fungal blight produces orange-colored cankers. 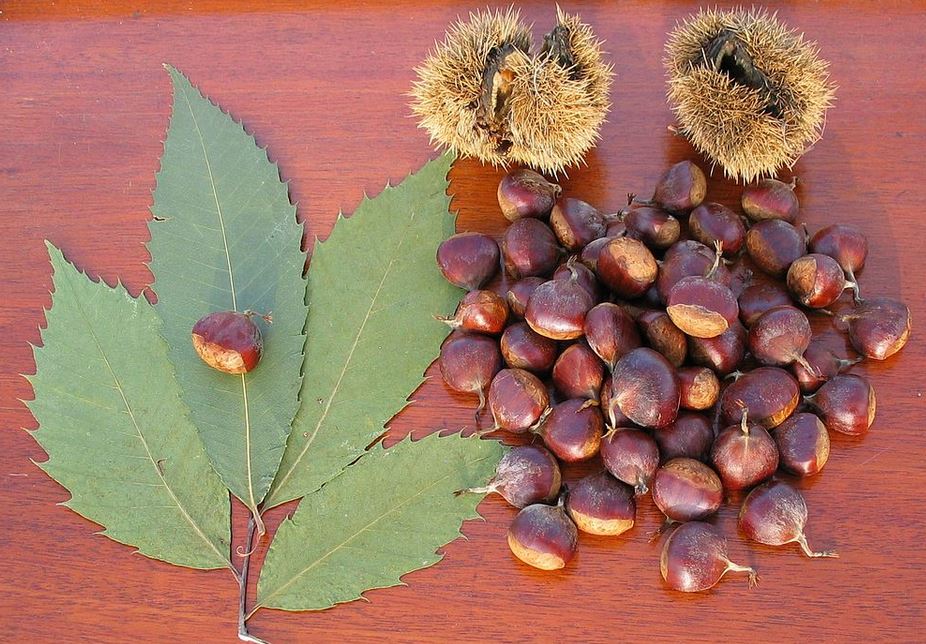 Restoration of the American chestnut
Many efforts devoted to rescuing the species have extended over decades. Most of these have involved controlled breeding among surviving specimens and hybridization with other chestnut species such as the Chinese chestnut, C. mollissima. Three of these hybrid chestnuts are in our collection and located on Wildflower Hill. Although these hybrids have more resistance to the chestnut blight they are not genetically pure American chestnuts and usually do reach the size of pure C. dentata trees. In addition, they too may eventually become infected and succumb. A better solution was needed. Five American chestnut saplings have been planted on Wildflower Hill.

Scientists at the State University of New York College of Environmental Science and Forestry (ESF) have developed a blight-tolerant tree. The ESF scientists, spearheaded by Professor William Powell, used plant-breeding techniques to insert a single gene from wheat into the C.dentata genome to confer blight-tolerance. The Darling 58 tree is the result of their efforts. Many of these transgenic trees are growing under highly controlled, licensed conditions, on the ESF campus near Syracuse, New York. Before the ESF scientists can release the Darling 58 trees the Environmental Protection Agency, the Food and Drug Administration, and the Department of Agriculture must approve this step. This is expected to occur in 2023.

The John Bartram Arboretum at Kendal at Oberlin is a participant in the ESF Transgenic American Chestnut Educational Partner Program. As a partner, we recently received five C.dentata saplings. They have been planted on Wildflower Hill. This planting is designed to evaluate the suitability of the site and as a prelude to planting the Darling 58 trees. We are confident that our site is appropriate because we already have three hybrid trees growing there, one of which is about 6.5 inches in diameter and almost 20 feet tall. If all goes well we may receive Darling 58 trees in about year.

How they did it.
The development of the Darling 58 began with an understanding of the pathogenesis of the cankers that result in tree death. An example of a well-developed canker with its characteristic orange color is shown in the adjacent figure. C. parasitica produces oxalic acid that attacks the cambium of the tree. The genome of the Darling 58 trees contains an enzyme, oxalic acid oxidase (OxO), that metabolizes the offending acid as shown in the formula below.

This enzyme was extracted from wheat but is also found in a large number of agricultural commodities. The choice of the wheat gene was made deliberately to assure the safety of the resulting tree and its nuts. The resulting transgenic tree is genetically identical to the wild-type tree with the exception of the OxO gene. It is of critical importance that the Darling 58 tree contains all of the genetic material that made C. dentata into a highly successful species that is able to integrate itself into natural surroundings. 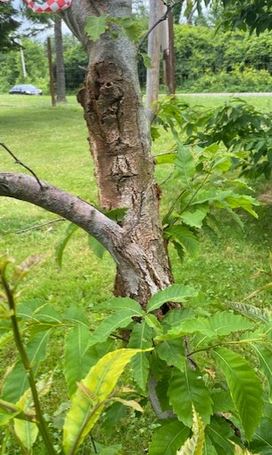 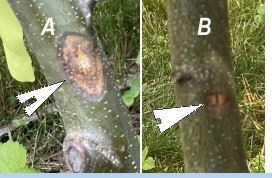 Legend: Left: mature canker..  Right: panel A is canker produced after experimental inoculation of C. dentata note orange tinge to lesion; and B is same inoculation procedure in Darling 58.

Photos by A. Lockwood at ESF campus

To take a closer look at the complex procedures that led to the development of the Darling 58  tree and to look to a future in which similar techniques may be applied follow the links below or read the suggested articles or watch Professor Powell's TEDx talk.